Our client is a well-known member of the New York financial community planning to run for political office. Activist groups and sensational journalists plagued our client with negative press. We leveled the playing field.

Many executives are unfairly scrutinized online because sensation is a big driver of search results. That was the case for our client, a finance executive whose problems included articles in the New York Times, Bloomberg, and others.

Reputation X has managed the online reputations of many executives working in most industries worldwide.

Our client's notability led to scrutiny by journalists and bloggers, as well as harassment by activists.

He'd been tangentially involved in the operations of a financial services company and was caught in the blast radius of bad company press. Investigative journalists focusing on New York politicians featured our client, painting him in a harsh light.

To make matters worse, the attention of major news outlets was exacerbated by political bloggers and others seeking to damage his online reputation by posting opinions thinly disguised as “facts”.

Reputation X was engaged to repair his search results. The first page of results contained negative content in the following publications:

Our task was to remove as much negative content from public view as possible, to provide a counter-narrative, to dilute with honest and relevant stories, and to push down (suppress) any remaining negative search results.

Our team found that the most effective way to mitigate the problem would involve a combination of reputation management strategies. We opted for a three-step campaign:

Our team began by examining problem pages like the New York Times with Bloomberg, as well as the reference sites that were helping to drive them to high visibility in search results.

We considered using a legal strategy but ultimately decided against it, as legal options tend to be very expensive with meager chances of success. We have found that publications like these are highly unlikely to take down an article due to legal pressure.

In some cases, search engines will remove certain search results if they violate its terms of use. In this case, the content of the pages did not fit the search engines' criteria for de-indexing.

Instead, we developed an SEO strategy to move the negative pages off of the first and second pages of search results, where they would be less likely to be seen by someone researching our client’s name.

We kicked off our SEO strategy by considering the search profiles of high-level financial service executives similar to our client. We selected four other individuals in the financial services and political realm with similar levels of notability to analyze.

The fruits of our research served as a baseline for search and social media results, reference structures, and other technical criteria that could help us craft a better narrative for our client.

We compared our client's online profile to those of our test group subjects to discover gaps in the following areas:

We then developed a persona that included an example of "ideal" search results. Based on our analysis, we considered what a similar person should include in their online representation, then compared the results with our client's current search profile.

In our client's case, social media profiles were prevalent on the first page of search results, as were sites and articles showcasing charitable works, Wikipedia, and Google's Knowledge Panel.

The Knowledge Panel below (not a client) has reverse-engineered data boxed in red. 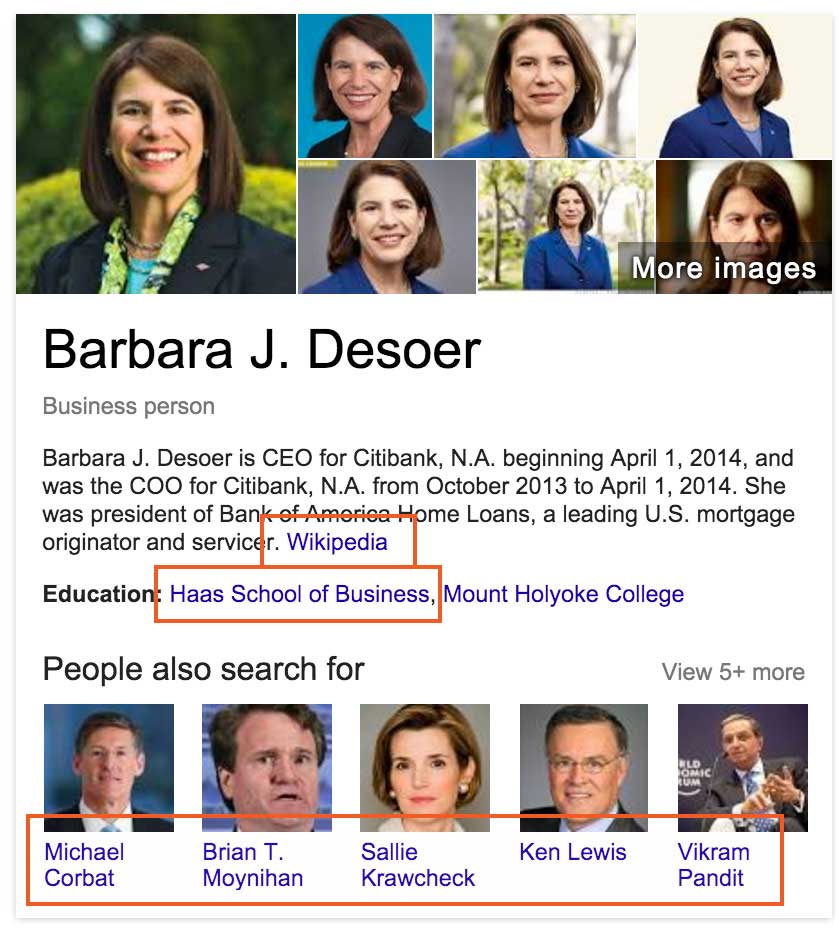 We found that our client would benefit from a knowledge panel depiction in search results.

The knowledge panel is an organized cluster of content placed directly in the upper right corner of search results. lt displays relevant information drawn from various online sources, occupying about 40% of the space at the top of normal search results. We knew that focusing on the knowledge panel would provide dilutive content to search results by necessitating a Wikipedia page. Using this method, we could kill two birds with one stone, which became the backbone of the reputation improvement campaign.

In order to earn the display of a Knowledge Panel, a series of events needed to take place. The Knowledge Panel gets much of its information from Wikipedia and curated metadata like WikiData, Virtual International Authority File, Wikinews, and others. We reverse-engineered the graphs of similar people and drew up a content, publication, and development plan based on the building blocks of the graph. 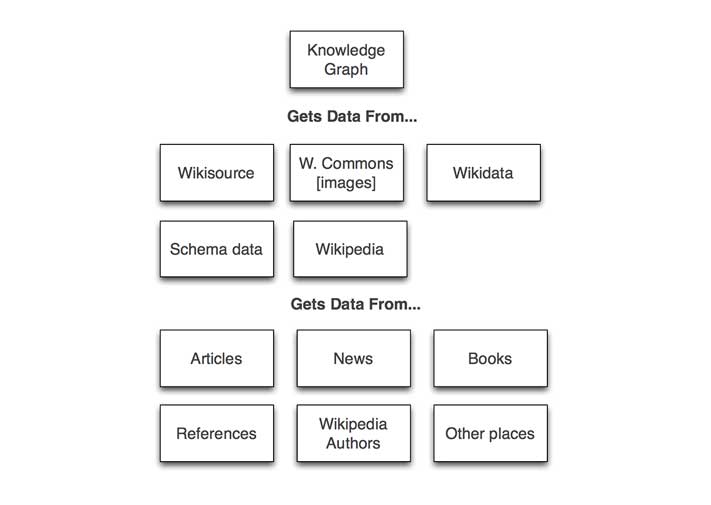 Our relationships enabled us to locate a Forbes writer that was perfect for the job. But before he could be approached, our client needed something newsworthy to act as a launchpad for the eventual story. We worked with our client to create a story and an accompanying press release. We launched it, garnered social media praise, and used the press release as the kernel needed for a great story. The author wrote the article according to Forbes's own journalistic guidelines, and it was published.

We similarly arranged the development of a few more third-party articles and soon had enough reference material to populate a Wikipedia page.

To do this, we worked with a Wikipedia writer to develop a basic, honest, and relevant profile using existing and recently created third-party content as reference material for the Wikipedia page. Wiki pages are publicly editable and must always be created with that fact in mind. All content must be verifiable and true. We succeeded in creating a Wikipedia page, Wiki Commons images, content, and more.

With the publication of the Forbes article and others, the Wikipedia page, and online images, search results began to change. Our next step was to strengthen our client's LinkedIn, Facebook, and Twitter profiles. At this point, the Knowledge Panel had not yet made its debut but we knew it was close. We revisited Wikipedia, linked the new and existing web properties, press, and social media, and then moved to create metadata.

In short, metadata is data that describes other data. It summarizes information about a chunk of content (like a web page) and makes it easier for search engines to verify the correct information to include in many places. Metadata is usually invisible to human visitors, meant only to guide Google bots in their voyage across the internet.

At this point in this reputation campaign, we began to implement metadata into websites we created for our client so that the information contained therein could be indexed by search engines more effectively. We also worked with websites specifically designed to describe relationships between data. Seldom seen by people, these are key to the operations of search engines.

We used those sites to draw road maps between the Wikipedia page and other content relevant to our client. Google followed the breadcrumbs we had laid out, and eventually...voila! The Knowledge Panel appeared.

The problem pages – primarily Bloomberg and the New York Times, had by this point become less visible on the first page of search results. Their positions had been usurped by content we developed or promoted, including the corporate leadership page from the parent corporation we changed. In addition, an image bar depicting images we had placed on various sites appeared.

By working to create the knowledge panel, we had created an entire ecosystem of relevant content that was engineered to succeed.

But the negatives, while far less visible, still existed on the page.

Social media profiles were still languishing on page two, so we redoubled our efforts to attract followers, refresh content, and increase overall relevance. Over a period of a few months, these pages gained ground. Facebook and Linkedin successfully appeared on the first page of search results and remained stable. The NYT article was relegated to the bottom of page one, and Bloomberg faded between pages one and two.

Our client’s search results completely transformed from a negative portrayal to a more balanced one as a result of our efforts. Two extremely difficult sites to move were significantly improved. The highly visible knowledge panel was developed and now dominates search results. Search results affecting the parent corporation are completely clear.