President Trump thinks Google is rigged against him. It's probably not, but that doesn't stop the scrutiny. Google's portrayal of Trump is a reflection of people's desires - all the people, not a group or an individual. A pandemic, economic disaster, and Black Lives Matter marches don't help.

While Donald Trump has mastered the art of publicity, it's a genie let out of its a bottle. Once escaped it can have unforeseen consequences like those we are seeing today.

For example, at one time President Trump wrote that "Google search results for “Trump News” shows only the viewing/reporting of Fake News Media. In other words, they have it RIGGED..."

Are Google results rigged? The answer is probably no. At least from what we can tell they aren't. Google simply reflects what it believes people want - they call it relevance. Google does not discern well between truth or lies (see "knowledge-based trust"), but it does a very good job of returning results the masses want - just not necessarily what an individual wants (though it does provide individualized results).

In his 1987 book “The Art of the Deal”, Tony Schwartz (ghost writer for Donald Trump) wrote that “…good publicity is preferable to bad, but from a bottom-line perspective, bad publicity is sometimes better than no publicity at all. Controversy, in short, sells.” Well, Trump is getting some pretty bad publicity these days, but Google is only the messenger.

In this article, we’ll take a closer look at Donald Trump’s approach to marketing and publicity, how it has affected his reputation and the ultimate result of his choices.

Psychology studies show that emotions are a critical factor in how we make decisions and even purchases. Pushing emotional hot buttons can cause content to get shared and even go viral.

Trump is a master at tapping into emotions frequently to spurn controversy and generate publicity. People view and share things that make them angry or generate other strong emotions. Google reflects this.

For example, when Holly Holm beat Rhonda Rousey in the UFC championship fight, Trump tweeted that he was glad to see her lose and that Rousey was “not a nice person”. By commenting on trending news, his tweet got over 12,000 retweets and over 2,000 comments.

Rousey also built her personal brand by having a strong personality. Trump’s comments probably also offended diehard Rousey supporters but also drew support from people who didn’t like her.

Note that this tweet had nothing to do with the 2016 election, but was an opportunity for Trump to tap into people’s emotions to continue to generate publicity and get mentioned again in the news. Again, Google reflects what people appear to want, and these desires are often fueled by emotions.

Trump has repeatedly tapped into similar opportunities by insulting and criticizing other celebrities, famous personalities and organizations, particularly those who opposed him. Whether or not you like him, you have to admit he knows how to get the media to do his bidding. They can't help themselves. 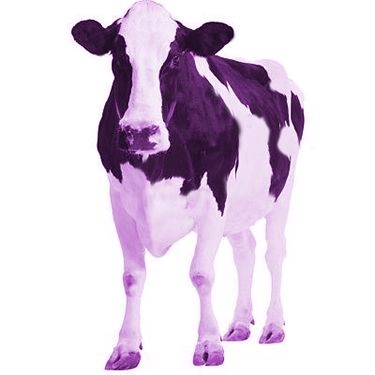 President Trump is a purple cow. In a field of white cows, the purple one stands out. Purple Cow is the name of a book penned by Seth Godin that says "the only way now to gain attention in a market is to not only market a product in a remarkable manner". Well, Trump has done that. People now pay attention to everything he does. Among a field of white cows he stands out because he is purple.

Before the presidential election in 2016, Trump developed a reputation as a successful billionaire business owner and real estate developer. His constant mainstream media exposure, books and appearance as the host of the Apprentice allowed him to grow his name recognition for years.

His unusual hair-do has even gotten him attention. 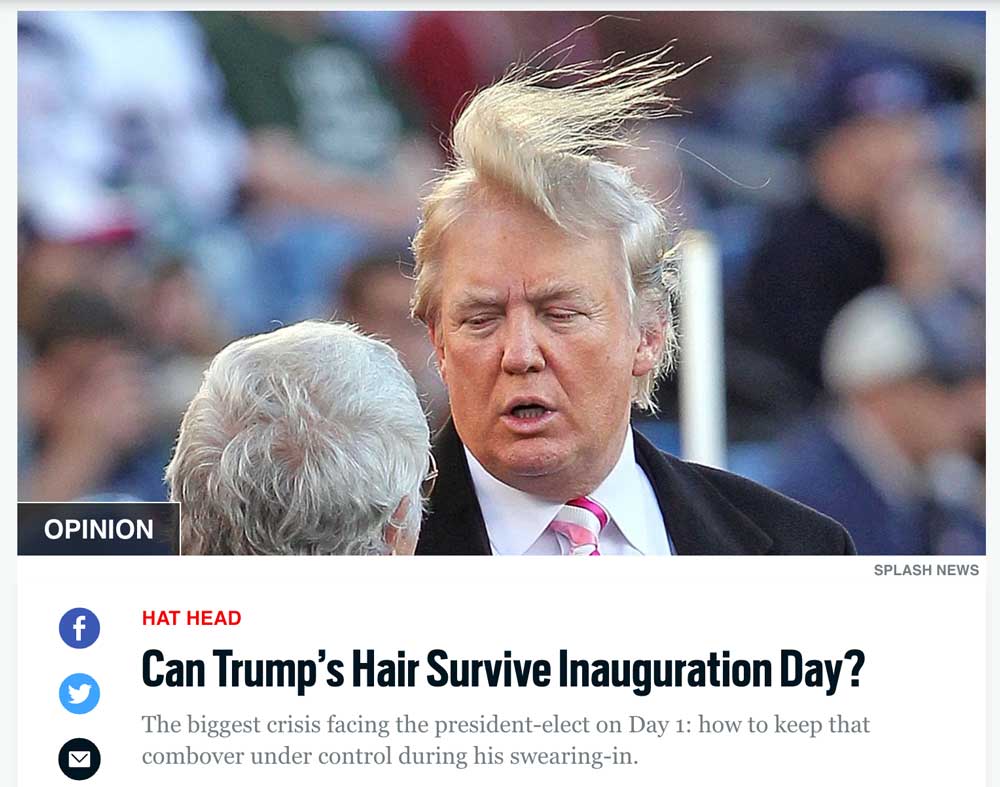 While sharing his political views has caused many people to view him unfavorably, Trump’s reputation and fame from previous years undoubtedly helped him secure the presidential nomination, gain momentum as a candidate and ultimately allowed him to win the election. So while many people might not approve of Trump, many still think of him as an intelligent business person who may still be able to implement positive change in government. But major news outlets cater to the majority, and the majority of Americans are in the middle. Google reflects the majority opinion in most cases.

President Trumps approach worked well to get him elected. But his methodology has remained unchanged. Unfortunately for him, his method has resulted in so many negative articles being written about him that Trumps reputation will probably just get worse in search results. This is because Google looks for overall trends in reputation and applies that historic data to new search results. In other words, it isn't as if Google wakes up with no memory every morning. Instead, it uses the mountains of information it already has data on to influence today's search results.

If you have a large following on Twitter, it can be an enormous content amplifier. It's no secret Trump seems to enjoy using Twitter as a channel to voice his opinions and generate ongoing controversy. Controversy drives search results in Google and Bing. It's not that things are rigged - they're just dramatic. The people of the now divided United States are venting on social media and in search results - the results are often ugly and rarely controllable.

Trump has developed a reputation for lashing out against well known politicians and celebrities who don’t support him. His negative energy bounces back. Most politicians are careful about personally attacking other people because they want as many people as possible to like them.

However, Trump isn’t afraid to offend people who are supporting his opponents. It appears that in his eyes, many of those people will never be his supporters and insulting opponents on social media will result in controversy which further disseminate Trump’s name and galvanize his supporters.

Trump didn’t seem too concerned about maintaining a “presidential” image or reputation. As a result, his tweets get lots of reactions and media coverage. That media coverage is massively promoted by both sides of the political spectrum - the thing is, according to Wikipedia most people are not conservative and about 29% are divided up into various flavors of Conservative. Those flavors include Enterprisers, Social Conservatives, and Pro-Government Conservatives. This Gallup poll puts Conservatives at about 35% of Americans. The rest are in the middle or liberal. Right or wrong, Google tends to reflect the majority opinion. That's why search results seem more centrist or liberal.

A recent FiveThirtyEight poll cites Trump’s approval rating at 42.9%. It makes him one of the least popular presidents in recent history. For comparison, the average approval rating for presidents 14 months into office was 58%. But ask a conservative, and he's well loved.

But is negative publicity actually Trump’s most powerful tool? It keeps his name in the headlines and on social media, which increases public familiarity with his personal brand.

A study conducted by Jonah Berger and associates at Stanford University showed that negative publicity can deliver positive results if a person or company is relatively unknown.

An example of this is the song Friday by Rebecca Black, which as dubbed by critics as one of the worst songs ever created. The song has accumulated over 118 million views but has over 3 million down votes.

However, Rebecca Black has accumulated over 1.3 million YouTube followers, released other songs that performed better and reportedly has a net worth of 1.5 million.

But Trump was already famous before running for president. Did negative publicity and controversy help him?

Studies reveal they care about the economy, government leadership, budget deficit and immigration. Of those, being able to feel financially secure is the most important thing on people’s minds during an election.

People also wanted change. The average middle class citizen was disappointed that they had to pay more for health care and wanted someone that would work for the people rather than corporations that funded their campaign.

Trump’s tweets and negative publicity from the news led to people viewing him as unsympathetic and even childish. Some people see Trump as sexist due to some of his comments against certain females and some people view him as racist or unconcerned due to his comments regarding illegal immigrants.

However, the people that voted for him were far more concerned about the ideas that he had for improving the economy and making changes to a system they often see as rigged against them. They were willing to overlook his personality to vote for someone that might make changes to the things that mattered to them. An excellent article by Michael Gerson in The Atlantic describes the phenomenon quite well.

One Trump supporter at Reputation X described him in the same terms as the biblical figure Samson. Samson was a hero to many, but he had quite a few flaws. The supporter stated that while "Trump is nothing like Jesus, he doesn't need to be". Instead he is their "savior" for today's times.

People are drawn to negative news

Another thing to note is that negative news often gets more reaction than positive news. That’s why the evening news tends to feature local crime, natural disasters and other negative occurrences. This may be due to an aspect of human psychology called "negativity bias".

In short, it appears that negative publicity kept people aware of Trump’s name and allowed him to spread his message. His campaign slogan was “Make America Great Again” and his core message was about implementing positive change in the system to improve the economy and help Americans get jobs to support their families. While most people voted for Hillary Clinton (the popular vote), enough people in the right places embraced his message and gave him the votes he needed to win the election via the Electoral College, something that has only happened five times.

Maintaining a positive and squeaky clean reputation is important to most people, but Donald Trump seems to thrive on controversy, he just doesn't like it when the winds don't blow his way (and who does?). His approach seems to have served him well enough, keeping him in the spotlight and allowing him to beat Hillary Clinton in the 2016 presidential election.

Before running for president, Trump had a reputation of being a hugely successful billionaire and business owner. While many people still respect and support him, other people have developed a less favorable view of Trump due to his approach and also negative media coverage.

So is negative publicity really a “negative”? Will Trump’s approach to publicity and the ensuing reputation it causes help or hurt his chances of winning the next election when he runs against someone more popular than Hillary Clinton? I suppose we’ll find out in 2020.

This reputation management case study is an example of a solution Reputation X provided for a ... 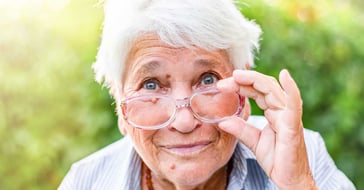 There was a man who worked for the Post Office whose job was to process mail that had illegible ... How to improve your reputation

They really are watching you. Whether you realize it or not, everything you do has an impact on ...