Wikipedia is one of the world’s most powerful websites. What Wikipedia says about you or your company can have a big impact, which is why many companies and organizations have tried to spruce up their Wikipedia pages - sometimes with disastrous effects.

Since its inception, Wikipedia has grown from a truly ‘open source’ platform to an oligarchy where influence matters, and some editors have exponentially more pull than others. To understand and get an insight into these power dynamics, it is vital to know who edited a Wikipedia page.

Importance of Wikipedia for company reputation

Many companies realize the importance of Wikipedia - it is why Wikipedia management is a core part of corporate reputation management strategy. Most companies want to have their own page or want to exercise some degree of control over their Wikipedia page - and why not? They know more about their company than anyone else - but Wikipedia isn't setup that way.

References from Wikipedia are widely sought after for publicity, but the information itself that appears on a Wikipedia page is an important part of any corporate reputation program.

Because of the power and influence that Wikipedia pages can effect on your company, it can be very tempting to create or edit your company’s Wikipedia page. Editing your own Wikipedia page is socially frowned upon, against Wikipedia’s rules, and can even hinder future efforts—pages with a higher amount of suspicious activity become harder to edit down the road.

Reputation X recommends you don’t edit your own Wikipedia page yourself. This can trigger a "COI" or Conflict of Interest which gets your edits reversed and a big message on your Wikipedia article saying the information may violate policies. However, that doesn’t mean you completely give up control. It just means that you work with the system. In that system, knowing who edited and created a Wikipedia page makes all the difference for Wikipedia management.

Not all Wikipedia editors are the good kind

Knowing who edited or deleted your Wikipedia article can inform you as to the best way to proceed. Most Wikipedia editors are honestly good people who are doing their best. But not all of them. Having an idea as to whom you're dealing with can make all the difference.

For instance, some extremely authoritative Wikipedia editors actually run their own PR practices on the side and perform paid editing. To make it seem like they are not paid editors they regularly nominate pages for deletion, look for fake editors (sock puppets) and expose them - not always accurately, and work hard to make it seem to other editors they are honest players. But they're actually running highly profitable paid editing practices.

Other editors have an axe to grind. They don't like companies they disagree with to reflect positive information about the brand. So they find ways to reverse factual and relevant references with positive brand sentiment. In theory these editors edits will be balanced out by other neutral editors, but not in practice. This is because the editors are powerful and well-regarded administrators of various types. They're essentially "made men". So their edits aren't challenged for fear of retribution.

The theory behind Wikipedia is that all people can contribute. Anyone on the internet can make or suggest edits to existing articles and create new articles. You don’t even need an account with Wikipedia to start working on the platform; you simply can start editing with your IP address.

While this is all technically true, it has misled many people and organizations into thinking that editing a Wikipedia page is a ten-minute chore. In practice, creating and editing Wikipedia pages is a much more involved and stringent process with many pitfalls and hidden traps to avoid.

For starters, Wikipedia has numerous bots scouring its pages looking for suspicious additions and edits. Around 1,000 pages are deleted each day on Wikipedia, and the Wikipedia community is always on the lookout for any conflicts of interest on the pages.

Pages with suspicious activity can be assigned some level of protection, blocking certain users from making changes to a page. In other words, not everyone can actually edit them.

Depending on the level of protection, these measures can block anyone from newly registered users to users with less than 500 approved edits. Combined with the bots and sometimes overzealous editors, the theory of ‘anyone can edit’ can quickly turn into practical quicksand.

Telling who edited a Wikipedia page

To keep an eye on the unbiased nature of the articles, all edits are made publicly. Knowing the edit history of any article gives you an insight into who’s editing which pages and who took a stake in a given page.

If you’ve considered editing your own Wikipedia page to polish your reputation a little, you’re in good company: Newt Gingrich and members of the Dutch royal family are just some examples of the hundreds (if not thousands) of people accused of meddling with their own Wikipedia entries.

Start with the article history tab

The first and most important tool in finding out who’s been involved with editing a Wikipedia page is the article history. This history is found above the text of the article and shows exactly which changes were made when and by which user. Clicking on the user shows the profile, which helps people identify their interest and their edit history. This first overview helps you identify the different stakeholders in the article. 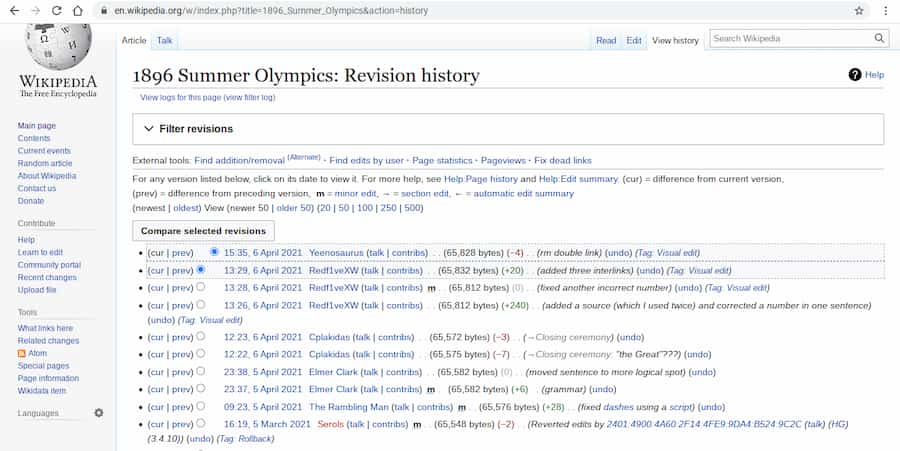 How the NYPD and FBI were caught

Unregistered users show up with an IP address only. Anyone can look up the location of an IP address, down to the zip code. Although looking this up may not identify the precise computer or person that made an edit, it outed FBI and CIA agents after it was found that edits to articles on Guantanamo Bay were made from FBI and CIA computers.

It also fingered the NYPD after edits the pages on the controversial and deadly arrest of Eric Gardner were found to have been done from their computers. Technically, that means that you could be regarded as suspicious if your next-door neighbor edits your page, but what are those chances?

Registered users are even more out in the open. Although not everyone can simply look up the IP addresses of Wikipedia users, administrators can. And often enough, a user’s history speaks volumes. Suspicious activity is quickly spotted and can lead to an investigation or a ban of a user.

These insights make the editing history page of a Wikipedia article a powerful tool in understanding Wikipedia, who edited any particular article, and the power dynamics that can be at play. Not every page is hotly contested, but the moral code on Wikipedia can make it a minefield for inexperienced editors or business owners who come to Wikipedia with an agenda.

When Wikipedia says "other technical data" they are talking about "fingerprinting". Fingerprinting is really creepy. Fingerprinting is when a browsers screen resolution, cookies, IP address, computer type, operating system type, and more are used together to identify a person even when their name is not known.

Even if you don't know the name of someone, you can find out a lot about them by the way their computer is setup and how it is used. This information is often transferred to Wikipedia when you access the site.

Professional paid editors tend not to get fingerprinted, at least not if they are any good at their job. Reputation X can state from experience that a large number of people accused of being paid editors (sock puppets) are in fact not. A few weeks ago we got a call from a woman who was at the end of her rope after her account was banned for being a sock puppet. She wasn't, but her year-old account was banned mainly because of her noob editing style. Since the person who banned her was a very well known editor we told her nothing could be done beyond what she had already tried.

One tactic that sometimes works when trying to identify who made a Wikipedia edit is when a registered Wikipedia user uses the same handle they've used in the past for social media or email accounts. These can be searched in Google and can help to identify who a user is in real life.

Honeypots can give you some information

Honeypots are ways to identify a user online by baiting them to click on a link. When they click on the link they arrive at a web page. The web page tracks their IP address and other data and can sometimes leave a cookie on their machine. One way to partially identify a Wikipedia user is to create a honeypot, something they are compelled to click on.

If the website they end up at, or just a web page, is set to be invisible to Google then no one else should be accessing the page. The one and only user who does must be the person who clicked on the link.

Honeypots can help identify bad people online and are especially helpful for corporate reputation clients who suspect a competitor is weaponizing their Wikipedia article by identifying where the editor is located. If it's in the same city as the competitor it can provide a clue as to whom is defacing their page.

Wikipedia edits can always be traced back to either an IP address or a username. Usernames are generally less conspicuous and harder to track, but administrators on Wikipedia have special tools that allow them to find out who’s behind a username.

Wikipedia is edited by hundreds of thousands of editors who can simultaneously work on the online encyclopedia’s pages. You can see which user edited a certain part by checking the history of an article.

How can you tell when a Wikipedia article was last edited?

Every Wikipedia article has a revision history page that shows the precise moment of each edit. You also can see previous versions to compare the article before each edit was made.

How to change Healthgrades ratings in 5 steps

As one of the top 20 sites seen most often in medical practice search results, Healthgrades is like ... 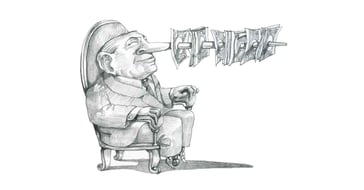 How to detect a bogus Wikipedia edit