Corporate reputation refers to people’s collective opinion regarding a corporation or enterprise. It’s based on such features such as search engine results, news coverage, and the publicized actions of the company. There are there some corporate reputation humdingers out there. The news media loves a sizzling story of a corporation’s fall from grace and with good reason. The public is receptive, clicks ensue, money is made. This is because the human brain seems wired to generate copious amounts of curiosity when the topic is salacious or negative.

Corporate reputation is an intangible asset

It’s anything of value owned by a company. Most of the time we think of assets in terms of a corporation’s land, buildings, inventory, or cash. These are tangible and quantifiable — something that is relatively easy to look at on a spreadsheet or even physically touch.

Some of the most recognized intangible assets are things like patents or copyrights. They obviously have value, but not the kind of value that you can place a number on.

Into this nebulous category, we place corporate reputation. It’s an asset, yes, and can be of immense value. But it’s not something that gets a line item or is tallied up at the end of the fiscal year. It’s intangible. But it still has value, huge value.

Since it is intangible, corporate reputation is easy to neglect. Even more serious, when this asset is in jeopardy, its owners may not know how to protect it or repair reputation.

In The Conglomerate, a journal on business law and economics, one writer makes the point that “The quality of a firm's choices and outcomes are one driver of reputation, but reputation also has a life of its own.” This life of its own accurately describes the risks and rewards of corporate reputation.

But there are upsides as well, at least for corporations with a good reputation. This good reputation as an asset, is one that’s very difficult for competitors to steal or to replicate. The authors of an academic paper in the International Journal of Business and Social Science make this point:

“Good corporate reputations are critical not only because of their potential for value creation, but also because their intangible character makes replication by competing firms considerably more difficult.”

Admitting its unwieldy nature, both advantages and disadvantages, is the first step towards taking effective action in terms of reputation management. But in order to manage a corporate reputation, you need to understand something very important — your reputation stakeholders.

Stakeholders are the people who have any level of interest or concern in the corporation. That can be a pretty broad and diverse group of people. What’s important here is to understand who those stakeholders are and how they see the brand.

Who are these stakeholders?

Here are some of the stakeholders within the company, along with their particular angle of interest:

Who are the stakeholders who are outside the company?

Each of these stakeholders (and there are more than just these) view the company in different ways because they have different interests.

Because these stakeholders have different interests, they will seek out information that is most relevant to that interest.

Nearly all of these stakeholders will turn to one source to analyze the company’s reputation:  Google. But how they Google the company, and the information that they are interested in will vary.

An investor, for example, may Google “united airlines stock price.”

The basic principle to grasp when asking how do these stakeholders view the brand is this: Their viewpoint is shaped based on what they see when they search for longtail keywords.

How a reputation is made

Corporate reputations, therefore, are not formed simply based on what a company does or the gaffes the CEO commits. Reputations are made by how stakeholders perceive the brand. That perception depends on three things:

As self-interested beings, we are going to look for intelligence that informs our particular interest or even corroborates our predilections (known as confirmation bias). If you’re an aspiring flight attendant, you are probably searching for flight attendant salaries for United. If you are a savvy investor, you are searching for market summary united airlines.

What you see in your search results influences what you think of the brand. Ergo, a reputation is made.

This is precisely why corporate reputation management can be so unwieldy. Each stakeholder persona needs to be understood and managed according to what he or she is interested in, searching for, and seeing in the search results.

Corporate reputation has everything to do with the sales funnel

That funnel is broad. It can be broken down into more detail:

The funnel becomes far more specific based on the different stakeholders. Not everyone, for example, is purchasing a United Airlines ticket from Newark to Berlin. Some stakeholders, as discussed above, are investors or job applicants.

Only then can you understand the relevant funnel and its impact on the sales process. Let’s take a fairly simple example — someone interested in purchasing a travel neck pillow.

At the awareness phase, they are interested simply in travel neck pillows. Terms like “memory foam,” “self-inflatable” and “micro velvet covers” aren’t even on their radar at this point. This customer is in the awareness stage, and their queries reflect it.

Autocomplete is their friend, and it shapes how they search, what they see, and the reputation of the products and corporations they consider.

Instantly, brand names, star ratings, and images are laying the foundation for what is building up to be a corporate reputation. In order to see how the reputation and sales funnel intertwine, lets hone in on a single brand, the BCOZZY. One cannot go very far in the search for a travel pillow without encountering the BCOZZY.

Naturally, the customer is going to Google it. Here, the corporate reputation of BCOZZY for our hypothetical travel pillow customer gets more defined. There are five-star reviews in the customer’s line of sight:

A deeper dive on Amazon surfaces even more positivity.

Overall, BCOZZY appears to have an excellent reputation among the travel neck pillow shoppers of the world. And, thanks to that reputation consisting of five star reviews and glowing recommendations, BCOZZY’s sales funnel is probably doing just fine.

When assessing your corporate reputation, analyze every funnel. And, for an even better perspective, analyze your competitor’s sales funnel, too.

Corporate reputation is shaped by the stakeholders

The irony of corporate reputation is that while stakeholders are the ones perceiving it, they are also the ones shaping it.

For example, a satisfied customer of the BCOZZY goes on to write a positive review.

This is one of the simplest examples of how stakeholders shape a company’s reputation. Customer buys. Customer raves. Reputation enhanced. In today’s review-happy commercial environment, corporate reputations rise and fall based on the words of individual consumers — either disgruntled or overjoyed.

But what other kind of stakeholders are there? There may be antagonistic stakeholders — those who hold nefarious intentions towards the company and want to damage its corporate reputation.

One notable example comes from the corporate reputation of Tesla, an electric car manufacturer. One review of Tesla’s Model S, published in the New York Times nonetheless, took Tesla to task with a scathing review. 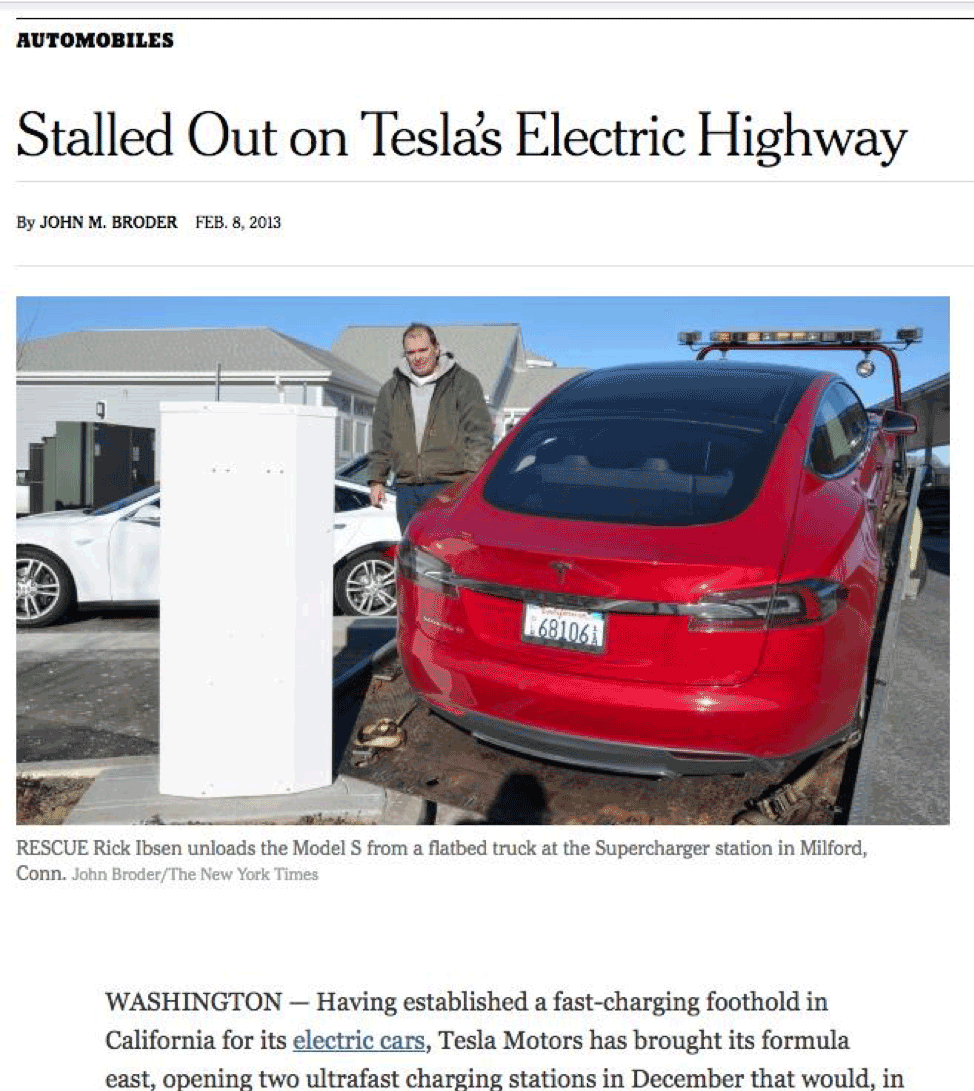 A review published in one of the nation’s most reputable publications can shake a company to its core.

The 1,200 word letter, along with eight charts, diagrams, and maps, is a study in reputational protection and a few memorable one liners.  (“While the vast majority of journalists are honest, some believe the facts shouldn’t get in the way of a salacious story.”)

Fighting back, however, comes with risk. That risk is known as the Streisand Effect. The Economist describes the Streisand Effect the following way:  “How efforts to suppress a juicy piece of online information can backfire and end up making things worse for the would-be censor.”

The famed artist Barbara Streisand sued the California Coastal Records Project for invasion of privacy. Her contention was that they possessed on their website illegal footage of her mansion, perched on the Malibu coast.

Streisand’s privacy was about to be invaded even more. Word of the lawsuit leaked out. Interest was piqued. Defenders of free speech rose up mightily. Advocates of cyber-libertarianism took to the proverbial streets of the Internet.

And, since the coastal project’s images were widely available, eventually everyone got a good look at Barbra Streisand’s beach house. We’ve saved you the trouble of having to Google it, because even the Wikipedia entry for “Streisand effect” features the image.

Defending your reputation can be dicey. You may, in fact, perform a successful counterattack as Elon Musk did. But you may also invite unwanted attention, as exemplified by Barbra Streisand.

In summary corporate reputation is one of a company’s intangible asset. You can’t taste it, smell it, or touchy it, but you can surely benefit from its improvement or suffer from its decline.

It all depends on your stakeholders. These are the people who have a vested interest in your brand. Perhaps they work for it, want to work for it, buy from it, or benefit from investing in it. Whatever the case, their reputation of a corporation depends on their angle of interest and what shows up when they Google it.

Corporate reputation is complex and multi-layered. It is also, gratefully, defensible. But only to a degree.